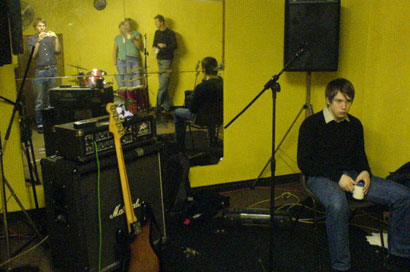 It is with pride and not a little relief that Gringo Records are set to unleash Sailors' 4-track 7" EP. The fact that this is Sailors' debut release shouldn't be allowed to suggest that, while by no means sad old muso farts, Sailors aren't exactly new kids on the block, either. There's history there, and some of that history is pretty ROCK!!

While obviously not something to be recommended, if you are going to suffer any degree of hearing impairment there are plenty of worse ways for it to happen than through regular exposure to The Melvins - which is exactly what happened to a pre-Sailors Nick Jones when he was King Buzzo's merchandise boy. And, while avoiding the crassly simplistic jibe ("Deaf singer? Yeah, they sound like it"), the damage done has exerted a profound, potentially unique, influence over the nature of the band's music. The threat of exacerbating hearing loss, combined with the geographical separation of its members (currently split between Leeds and Newcastle ), has led to Sailors' live shows becoming increasingly sporadic, lending each of them the air of an event to be cherished.

Maybe it's the impact of Nick's partial deafness, maybe because the infrequency of live shows has forced Sailors to find a way of working that is uniquely theirs, or maybe it's just down to the combination of personalities involved that mean time and again Sailors undermine any attempt to identify obvious or consistent reference points. One listen to the 4 tracks on the EP might bring to mind a succession of generally long forgotten names like Head of David or The Blue Aeroplanes, Fire Engines, Wire, or Screaming Blue Messiahs. Listen again and it might just as easily be The Birthday Party or Girls Against Boys. But, the thing is, apart from in the most fleeting, obscure or superficial of ways, they don't really sound like any of these groups. Or, to put it another way, they sound like all of them, often simultaneously.

All of which leaves Sailors frustratingly elusive (which, at a time when it seems the mechanics of marketing demand content that is ever more clearly defined, can only be a good thing), something that could just make Sailors one of the most fashionable group around - or one of the least. But either way, that it seems unlikely to be of too great a concern to them might just prove to be their greatest strength of all.