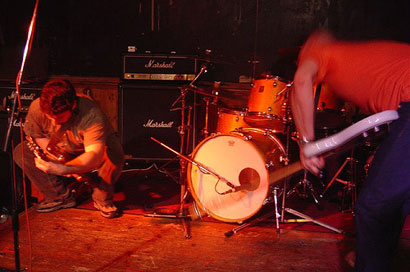 Beyond their first names - Christian (drums), Jason (bass guitar), Steven (guitar and vocals) - and that they originate from Newcastle, very little is known about The Unit Ama. They came to the attention of Gringo Records via a reputation for jaw droppingly beautiful and intense live performances. They delivered their self-titled album with no fuss or fanfare and slipped back to the North East.

The Unit Ama make music that explodes outward: dense but soothing metronomic pulses morph into a wild fracturing of the traditional rock trio, taking the possibilities of what can be done with guitar, bass, drums and vocals into the stratosphere. Whereas others have saught to push the limits of rock music by intense complication and trickery, The Unit Ama's approach is natural, human, shamanic even.

In addition to appearances on a number of compilations, The Unit Ama's songs have found a life of their own through the band's self-released Variations series. Now in its third instalment, Variations allows other artists free range to reinterpret a band's output as they see fit, further reinforcing the idea that The Unit Ama's music is not their own property, but that it somehow exists without a need for a definitive article and is much yours as it is theirs This free-wheeling approach to music making characterises The Unit Ama's first album. This is not anthemic, easy listening, but something far more challenging and ultimately, rewarding.