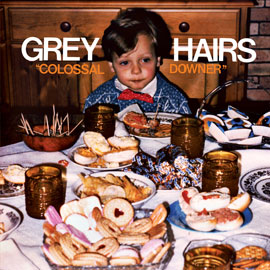 Featuring members of UK underground bands as diverse and respected as Lords, Fists, Cult Of Dom Keller, Fonda 500 and Kogumaza, Grey Hairs is a conscious attempt to return to the gut instinct impulses that got its 4 band members out of their bedrooms and onstage in the first place. With a reputation for carefree and chaotic live performances, the men and women of Grey Hairs have turned what started as an excuse to go to the pub on a weeknight into something truly special within the space of a couple of years.

Following 7"s on Gringo and Hello Thor (a Harry Nilsson covers single entitled Grey Hairs Schmey Hairs), Colossal Downer weighs in bigger, weirder, catchier and (most importantly) louder than its predecessors. It's a convincing argument that the best way to deal with approaching middle-age and increasingly pointless employment is to simply buy more amplifiers. Never has the gradual disintegration of hearing been quite as gleeful, or therapeutic.

Conceived as 2 EPs ("Man Gulps" and "Little Fingers") for your listening convenience (we're all busy people), Colossal Downer recalls nothing less than the pre-goldrush, anything-goes era of Nirvana before everyone got so hung up on genre definition. Rapid-fire punk rock blasters nestle up to lumbering caveman grind. Echoey surf clang shares vinyl space with riff-heavy garage fuzz. It's how records are meant to be: idiosyncratic and representative of the people who made them.

Being in a band in the 21st century is a curious thing. You learn the art of touring from the history books and you do it once or twice as a rite of passage before you get a "proper job". It's the domain of the financially secure.

Every week a new book or documentary comes out that redefines then-young-people's instinctive and impulsive actions as acts of clear, intelligent design and those once-young-now-old-people reunite to play their accidental masterpiece albums to crowds of actually-young-people as though they designed it that way all along.

You know what? Fuck that.

Grey Hairs are financially insecure and worried, staring middle age in the face and backing down, afraid. The future is confusing and upsetting. The young distress them and they deal with modern technology like a dog being shown a card trick. Nottingham is heavy with music industry conferences these days but they can't even mobilise themselves to get to the boozer let alone mobilise their social media gameplan.

Are they angry? Yes they are.

What are they going to do about it?

The same as they've always done: form a band and tour in a Transit while no one takes any notice whatsoever. It's said it isn't stupid people who make mistakes; it is stupid people who repeat them again and again.