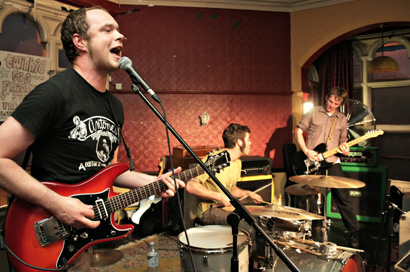 "... Lords have a fertile imagination and this punk rocks like a mofo. " - Kerrang

"all fun and games and funk and gall and fluster and gigantic riffs. 8/10" - Rock sound

"the true masters of their mutant-blues craft, of venturing beyond post-prefixes and into a realm of retrospective yet forward-thinking compositional intelligence to which few acts nay, no British act, to this punters knowledge can offer a single song of equal worth to." - Drowned In Sound

Nottingham's LORDS ( Elvis Beetham Wallace - drums; Philip Welding - vocals, guitar and Chris Summerlin - guitar ) belong to a new school of bands that ignore the old rock rulebook. Their brand new album, Everyone Is People mixes up the unpredictability (and under-appreciated tenderness) of Captain Beefheart, the unashamed rock blow-out jams of Thin Lizzy and the MC5 and the slinky grooves of ZZ Top and The Meters into something entirely their own.

Vinyl copies of the new album come with 3 extra tracks as downloads: covers of 'Cheap Sunglasses ' by ZZ Top, 'Dour Hogwax' by labelmates Bilge Pump and their version of 'Everybody's Got Something To Hide Except For Me And My Monkey ' that featured in BBC Radio One's tribute to The Beatles' White Album.

Heavy music seems the vogue right now. But 'heavy' usually means posturing, dry ice, distortion and a cold, detached approach. Everyone Is People isn't any of those things but yet it is supremely heavy. It's heavy like Jimi Hendrix was heavy, or John Coltrane was heavy. Spiritually heavy, thrilling, righteous, ultimately uplifting and always unmistakably Lords.

Lords will tour the UK in October/November including an appearance with Sun Ra's Arkestra at the Hobaken Festival on November 9th .

It's been 2 years since the release of the band's debut LP This Ain't A Hate Thing, It's A Love Thing (Gringo, 2006) and for what started out as a fun offshoot project for 3 friends, Lords has now taken on a life of it's own.

The band formed in 2003 with all 3 members already having released several records in various acclaimed bands (Twinkie, Wolves Of Greece, Reynolds, Schema, Manrae, The Surf Creatures ) rising from the mid-90s DIY underground and fanzine culture in the UK. If Lords had a mission at their formation then it was simply to rebel against the trend for angst and catharsis in punk rock and return to playing music that allowed for communal release and a collective party experience for both band and audience. Maybe to their own surprise this manifested itself in a bastardised but totally natural hybrid of early 20th century blues, squidgy 70s rock and euphoric free jazz coupled to the live energy of the DC hardcore bands that had inspired the members to play music in the first place. Most importantly, it spawned a band that fellow groups and gig-goers alike embraced and supported until the idea of 'Lords' became somehow self-supporting, an entity that no one member was in charge of, that had no rules and was totally unique.

This Ain't A Hate Thing featured in many of 2006's end of year Best Of polls and the band started 2007 with a show at the annual SXSW festival in Austin , Texas that doubled as a research mission into Tex Mex cuisine. They've been invited to play shows with The Magic Band , The Groundhogs , Shellac , Lightning Bolt , Trans Am , The Night Marchers and Archie Bronson Outfit as well as squeezing in tours with labelmates Bilge Pump and The Unit Ama , a split 10 inch and tour with Part Chimp , Todd and Hey Colossus and appearances at the Latitude and Dot To Dot Festivals. Not bad for weekend warriors.

Not that the last couple of years have been one solid party for the band. In fact, at various points it looked likely that they may not continue due to strife of at times unbelievable magnitude. You name it, it happened. Serious stuff - call it bad luck if you like or just call it 'adulthood'. Either will do. Let's leave it at that.

In the middle of this, the band decided to head back into the studio to start work on a 2nd album. Whereas the first record was conceived as a an exaggerated version of the band's live show at the time, the new recordings show an expansion of dynamics and a honing of the band's sound that might be described as 'mature', although not by them. The songs are darker than those on the first album, perhaps reflecting current events for the members. The guitars are more thumping and closer to the righteous blast of their notoriously over-amplified live shows. The drums both anchor proceedings and propel them into even free-er territories than before and whereas the lyrics and vocals on the first album were treated like ecstatic exclamations, the new songs are more centered around the words and the singing - with tremendous results.

Most importantly (and in the face of extreme adversity) their original mission statement of tackling woes and worries head on and coming out the other side smiling remains intact. Unlike their hearing. I guess they are a blues band after all, in the best sense of the word.

Elvis and Chris also play with songwriter Lucinda Chua in the band Felix
All 3 members have played on several occasions with Damo Suzuki.
Chris also plays solo as Last Of The Real Hardmen and recently performed as part of Glenn Branca's guitar ensemble. He is also currently writing and playing with former Mule vocalist PW Long.
Elvis currently lives in Ireland and is a qualified lifeguard. Like in Baywatch.