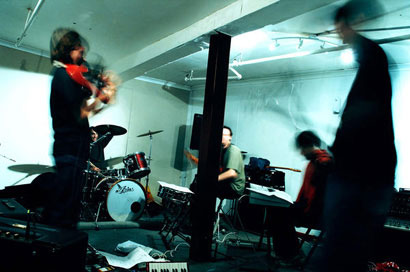 Souvaris have been playing together for over 6 years, and release their second album, "A Hat", on Gringo Records in March 2007. Written over three years and mastered by John Golden (Sonic Youth, Melvins, Lightning Bolt), "A Hat" joyfully throws together the krautrock motorik of Neu! and Can, the grooves and bad jazz of Tortoise and Battles and the odd Yo La Tengo or Bedhead-esque pop hook. Having played countless shows with bands ranging from The Shipping News to Matt Elliott, Fly Pan Am to old friends Explosions in the Sky, Souvaris deliver a live show that is as entertaining as it is subtle, as direct as it is layered.

Souvaris released their first EP, a self-titled 12" on Telesphere Recordings, in 2003, described as miles ahead of the usual post rock sludge. A debut album, "I Felt Nothing At All", followed, released in January 2005 on Bearos Records, and distributed in France by la FNAC. The band, although proud of the record, felt they needed to push themselves further and wholly detach themselves from the limiting quiet-loud aesthetic of a million post-rock soundalikes. The past two years have been spent writing new music, developing new sounds and approaches, and honing the dynamics and energy of their songs. Wandering chords and ambient washes have been replaced by tight grooves, intricate rhythms and playful melodies.

[Souvaris are] a lovely breath of fresh air for a genre that often feels exceedingly stagnant...It takes time to unravel the arrangements that Souvaris have created, but it's a rewarding experience. - splendidzine.com