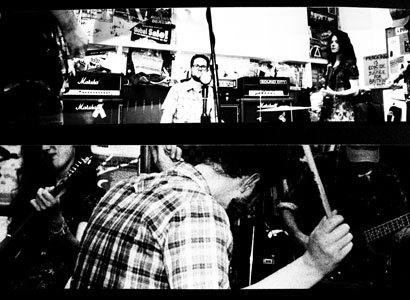 Up from the sea-lap pebbles of the Sussex coast, beneath the battled sky, there, cupped like metal-fire in the clutching cauldron of the Brighton downs dwells the throb, purr, snarl and roar of Sweet Williams. A band whose grooves warm like loving wine, whose riffs swagger and lurch with all the seeming bonhomie of a sailor new on shore-leave, and yet like a stray dog which you imagined you could tame, those same riffs are liable in the end to wind up biting you on the arse.

Convened by ex-Charlottefield vocalist and guitarist Thomas House and assembled from a collection of musicians whose other projects, both former and current (including those of House himself), spread like marble veins throughout the strata of the vibrant wealth of the Brighton alternative music scene, Sweet Williams have, since their debut album Bliss, consolidated a sound which has become ever richer and ever more compelling. The progress of that journey began to be illustrated at the end of 2014 and beginning of 2015 with the release of the two download EPs Two Clocks and You might Be Singing to Yourself the former part live recording, part Spanish studio recordings and the latter recorded by the band at home in Brighton. Now with the completion of their second full studio album (Please Let Me Sleep On Your Tonight), that progress is made most apparent.

To watch the band live is to be swept up in a musical embrace which even at its most savage and complex moments, even at its most disorientating never feels less than natural and right. But that natural feel and the infectious immediacy of the sound belie the exquisite intricacies of the arrangements and the sheer bloody hard work and endeavour therein. Andy Thomas' head-sway bass, grinds and syncopates in lip-curl licks which knit with the beautiful fascination and disarming power of Tom Barnes' drums to launch a tightly woven, complicated raft for the two guitars of House and Sarah Dobson to sail upon. Guitars which work at odds with each other at times in aggressive counterpoint opposition, only to then come together as friends in shimmering, lush accord, guitars which hang chords upon the air like velvet valve-mist but which, at any moment, will turn on a penny into sharp, murderous clamour and rage. Atop all this like a watchful hawk, sit the vocals of Thomas House. Sometimes hanging back, sometimes malevolent, always unbowed, forever defiant, they range from the laconic and gently stated through to unbridled, vicious howls.

ACTIVE FROM 2011 TO PRESENT